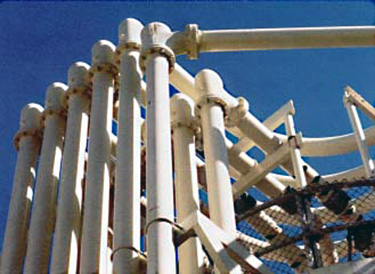 HammerTek® Smart Elbow® deflection elbows can offer benefits beyond solving manufacturing problems. When Miller Brewing Company needed a space-saving design solution, they found the elbows solved their predicament and saved them money in the process.

When Roy Marin, staff engineer at the Miller Brewing Co. plant in Fort Worth, Tex., learned about theHammerTek® Smart Elbow® he was intrigued. Marin had been researching the redesign of the plant’s grain unload system. The problem with the current system occurred when the automatic diverter switched the line from one silo to another. The process caused continual maintenance and housekeeping issues. Marin’s challenge was to replace the unit with a piping panel in the same space. The new design specified a manifold with 12, four-foot radius sweep elbows at the base of the silos, and there wasn’t enough available room.

As Marin learned more about the Smart Elbow® deflection elbow, it became the clear that it would not only solve his space challenges, but would also reduce product degradation. The Smart Elbow® design provides change of direction in pneumatic and slurry conveying systems without the wear, plugging, product degradation or contamination problems which characterize sweep elbow and plugged-tee equipped systems — and does so in far less space. This impressed Marin, because maintaining the integrity of the barley hulls was also a key consideration since they provide a valuable filtration function in the brewing process.

Miller Brewing decided to specify the HammerTek® Smart Elbow® model in its new design. In addition to meeting their space requirements, the HammerTek® elbow afforded them with a number of other benefits, including saving them $30,000 in design and installation time. In the two years following, they hadn’t experienced one problem. For the full case study, click here.