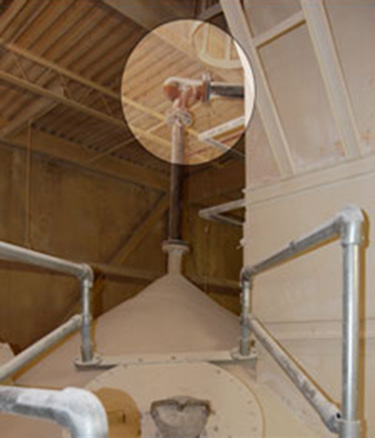 When the Upper Occoquan Sewage Authority (UOSA) experienced a blowout, it caused not only costly and time-consuming downtime and cleanup, but also health risks and safety concerns. Thanks to the HammerTek® Smart Elbow® deflection elbow, the wastewater treatment plant hasn’t had an elbow failure again since installation. Click here to read the full case study.

Robert Forgione, P.E. and his team at the Upper Occoquan Water Reclamation Plant in Centreville, Va. had a mess on their hands. Another blowout from a failed elbow in the conveying line had created a huge pile of dry pebble lime to clean up. The hole measured only ½ inch in diameter, yet in the time it took to shut down the high pressure conveying system, it had spewed abrasive powder throughout the building. In addition to the cost of shutting the plant down and cleaning up the leaked material, Forgione also had to deal with a hazardous slip-and-fall situation and unacceptable air quality levels. Forgione, the director of the UOSA operations and maintenance division, was responsible for the recovery after failed and leaked elbows every six months. “We had to fix this situation,” said Forgione.

After trying multiple types of elbows without success, Forgione discovered the Smart Elbow. It had been installed in a similar wastewater treatment facility to solve the same issue, and the plant hadn’t experienced one blowout since. Forgione decided to test the Smart Elbow, and after a year, not only didn’t they leak or fail, but they showed no sign of wear.

After working with HammerTek and Joe Cathey of Cathey Prosolutions, Sykesville, Md. to specify the best solution, Forgione ordered the HammerLoy™ Series Smart Elbow models, which feature a custom alloy with impressive hardness proven in handling abrasives. Five 45-degree, four-inch elbows were installed where the trucks offload their lime and nine 90-degree, four-inch elbows were installed at the tops of the silos.

Four years later, UOSA hadn’t had one blowout. “With the Smart Elbow units, we’ve eliminated the primary source of lime dust along with the hazardous conditions it creates,” Forgione said. He added, “Our experience with HammerTek has been excellent, the delivery was fast and our mechanics were able to install it pretty quickly without any complaints. If we ever get wear in an elbow anywhere in the plant, we’ll replace it with the Smart Elbow deflection elbow.”