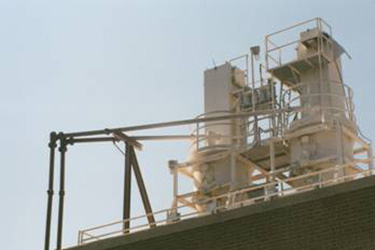 With a daily volume exceeding 80 million gallons of water treated, the Alexandria Sanitation Authority knows a little bit about the need for efficiency and just how catastrophic line breaches can be. To control pH, the facility uses more than 500,000 pounds of pelletized lime each month. Trucks deliver the material to 70-foot silos via a pair of four-inch lines.

Due to its abrasive nature, pelletized lime was wreaking havoc on the conveying system by literally wearing the traditional long-sweep elbows from the inside out. The never-ending cycle of repair-and-replace began within six months of elbow installation.

Upgrading to different traditional long-sweep elbows only marginally increased the functional lifespan from six to nine months. When the elbows would fail — and they would most assuredly fail — the powdery, dusty lime created a host of problems ranging from downtime to the very real risk of respiratory problems to those exposed.

When a postcard from Hammertek offering a free trial was passed on to Lead Mechanic Bob Devereux by Plant Process Manager Tom Tyler, he decided to put the Smart Elbow® deflection elbow to the test. Alexandria Sanitation Authority began replacing sweeps in the lime conveying system with 4″ Hammerloy™ Smart Elbow models. Over three months, five Smart Elbow products were deployed.

The Smart Elbow design rely on deflection, not impact, to change flow direction, thereby eliminating the impact-related problems associated with virtually every other conveying elbow design. At system start-up, a gently rotating ball of suspended material forms in the vortex chamber of the Smart Elbow deflection elbow. As the main flow of material passes this ball, it is deflected through the desired change of direction without impact, friction or wear to the elbow’s interior surfaces.

Click here to read the full case study, and see for yourself how much time — and money — Hammertek’s Smart Elbow deflection elbow could mean for your operation.